Before the dissolution of British India in 1947, the location had initially been used as the premises of a PT and Mountaineering School of the British Indian Army, on the site of an old POW Camp for prisoners from the Boer War, and later it became the premises of the Royal Indian Army Service Corps. After the division of the old Indian Army between India and Pakistan in 1947, Brigadier Francis Ingall, an officer of the British Indian Army, was selected by the C-in-C India, Field Marshal Sir Claude Auchinleck, as first commandant of the Pakistan Military Academy, established at Kakul. He determined that the PMA would be organized based upon the model established by Sandhurst and requested a regimental sergeant major from the Brigade of Guards to help with training. He was fortunate to have the support of a number of old Indian Army officers who were transferred to the Pakistan Army, among them Lieutenant-Colonel Attiqur Rahman, Major S.G.Mehdi M.C., the first PMA adjutant and founder of Qasim company, fondly known as “Killer” Mehdi, who later went on to command the SSG ( Special Service Group) of the Pakistan Army. In spite of facilities which were nowhere near the level of those enjoyed by the Indian Military Academy at Dehra Dun, Ingall won the confidence of his cadets and instructors. When, late in 1947, the dispute over the accession of Jammu and Kashmir led to armed conflict between India and Pakistan, Ingall was able to structure the Academy’s training to enable newly commissioned officers to be immediately effective when they joined units on active service. Ingall was appointed OBE after completing his term as commandant in 1950. What probably gave him more satisfaction was the decision to name Kakul’s central lecture theatre Ingall Hall – though this was not built until many years after he had left. He kept in touch with the academy for the rest of his life, making his last visit in November, 1997 where he said:

I have given many addresses from this position here and from 1948 to 1951 I was very keen on the question of Pakistan and believed in it. I believed what the Quaid-e-Azam preached. I believe in Islam.

Cadets from IMA (66) arrived in October 1947 and new cadets for Ist PMA Long Course (78) and Ist Graduates Course (63) were selected in Pakistan and training started officially in January 1948. Two hundred and seven cadets started their training in January 1948. On January 25, 1948, “The First Pakistan Battalion” was instituted. This battalion has four companies which were “named after the luminaries of Muslim military history” (e.g., Khalid, Tariq, Qasim, and Salahuddin). In March 1948, the First Battalion “was bestowed with Quaid-e-Azam’s patronage as Colonel-in-Chief, and the most coveted claim “The Quaid-e-Azam’s Own”.

Khawaja Nazimuddin gave the Quaid-e-Azam banner to the Pakistan Military Academy on behalf of Quaid-e-Azam Mohammed Ali Jinnah. The Quaid-e-Azam banner is held aloft by the champion company at every passing out parade. “Regimental colours presented in 1950 by Liaquat Ali Khan, the first Prime Minister of Pakistan and the National Standard in 1961 by General Muhammad Musa, the then-Commander-in-Chief of the Pakistan Army, have been some of the honours showered on the Academy, which it has always jealously guarded and kept high in letter and spirit.”

The academy is located in Abbottabad, at an elevation of 1,220 meters (4,000 feet). Abbottabad, named after the British administrator James Abbott in the year 1853, is a city located in the Hazara region of the Khyber Pakhtunkhwa province, in Pakistan. The city is situated in the Orash Valley, 120 kilometres (75 miles) north of the capital Islamabad, and 150 kilometres (93 miles) east of Peshawar, at an altitude of 1,260 metres (4,134 ft) and is the capital of the Abbottabad District. It borders Azad Kashmir to the east. The city is well known throughout Pakistan for its pleasant weather, high-standard educational institutions and military establishments as it has a robust presence of soldiers engaged in various activities. Pine trees are common in the area, whereas the climate is moderate both in winters and summers. The city is equipped with markets and all sorts of transport facilities. The city is only at a short distance from the academy.

The educational philosophy of the academy is to impart more than just combat training. The academy provides such an environment that every cadet develops attributes of Courage, Discipline, Integrity, Dignity, Honour and Patriotism. The academy provides all sorts of knowledge and wisdom that will be necessary for the cadets of today to implement when they become officers and are entrusted with an authority. In army all young officers have great respect for their seniors and this character is imparted during their stay at the academy.

Every cadet must be clear of his/her aim of joining the army. With a clear mindset every cadet is required to work hard and with zeal. He should be willing to take risks and lead his team from the front. Teamwork is an essential part of the extra-curricular activities and field exercises.

The academy offers a four-year undergraduate program leading to the Bachelors in Military Art and Science (BMAS)  including some common subjects as English, Military Geography, National and International Affairs, Islamic Studies, Military and General Science or Social Science. The long course cadets study two years for the degree before commissioning and complete their degree in their units. Every Gentleman Cadet passing out of the academy has a minimum graduation (from MCE, CEME, MCS, AM College or civil institutes) except for Long Course cadets who complete their degree after their passing out. 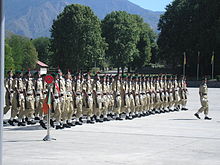 The academy also has a Central Library that has a large collection of books on nearly every subject. The library also has journals and research materials. Along with the library the academy also has three massive computer laboratories and four latest computer-controlled language laboratories. It is important that the cadets be aware of the current national and international news, for which PMA has set up its own broadcast channel.

Apart from the above courses and facilities, Pakistan Military Academy also has a range of clubs and societies which are: 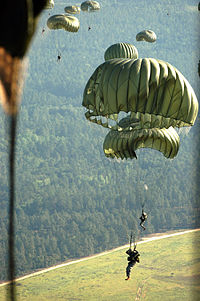 which all cadets have to achieve in order to pass. The physical requirements increase with promotion to the next term. The basic requirement for cadets of first term is to be able to complete one mile run (1.6 kilometers) in six minutes and thirty seconds. In second term, cadets are required to complete one mile run in six minutes and twenty seconds. For third term cadets one mile time is six minutes and ten seconds and for fourth term cadets i.e. the senior most cadets are required to run one mile within six minutes. Other tests includes push ups, sit ups, chin up, rope test, five mile running, assault course, and the acid test. These tests generally test the stamina and strength of a cadet.

In the acid test, cadets begin by traversing a mountain while carrying logs on their shoulders. This is followed by a 14.5 km run in full gear to an obstacle course. Those completing the course are given five rounds with which to hit a target at a distance of 22m.

LCs are also required to pass physical efficiency tests like GCs, but the standards are bit less keeping in view to their physique. The basic requirement for all lady cadets is to run one mile (1.6 km) within ten minutes. Other tests includes push ups, sit ups, bar hanging, assault course and also undergoes an exercise Qiyadat with GCs. They are entitled to do Horse Riding, Shooting, Swimming, and Fencing; depending on their will. LCs also compete for firing medal and PT medal.

There are also variety of outdoor clubs that helps in increasing the physical fitness of cadets:

At PMA potential officers undergo a series of grueling training programs designed to inculcate the attributes and qualities essential for a career in the Pakistani armed forces. Some features of the training program include:

There are a number of training exercises for cadets, which include:

For the sake of training the Gentlemen Cadets are organized in battalions and then further into companies. There are 16 companies in Pakistan Military Academy, all of them are named after famous Muslim warriors and commanders.

The Pakistan Military Academy Band (PMA Band) is a Pakistani military band that serves the PMA in Kakul. It was founded in 1958 and was first headed by Subedar Amir Hussain. It annually participates the Pakistan Day Parade in Islamabad and takes part in all ceremonies hosted at the PMA. It also takes part in the PMA’s 14 August Parade as well as the end of the year passing out parade.

There are five courses running parallel to each other. The courses are:

The PMA Long Course is for regular commission officers of combat and combat support arms & services. The Long Course has a duration of two years, which is further divided into four terms of six months each. After the 2-year training period Cadets pass out as 2nd Lieutenants.

The PMA Graduate Course is taken by those cadets, who have already graduated. These cadets, like those of the Technical Graduate Course, undergo one year of military training. They pass out as Lieutenants or Captains depending upon their education.

Candidates who wish to join the army as an engineer apply for this course. It is necessary that the candidate has attained 12 years of academic education with Physics, Chemistry and Mathematics. Candidates who are successful in all tests conducted by the army for selection are then sent to one of these institutions for a Bachelor of Engineering degree, depending on the field they choose:

All of the above institutions are campuses of a public sector university, National University of Sciences and Technology, Islamabad which is one of the top engineering universities of Pakistan. After completing their Bachelor of Engineering degree from one of these institutions, the E-Cadets, as they are called, are sent to Pakistan Military Academy, Kakul for military training of one year after which they directly attain the rank of Captain in their respective units.

To be eligible for this course, a candidate must have attained 16 (18 preferred) years of academic education with Physics, Chemistry and Biology. Candidates who pass initial and GHQ Selection Board tests conducted by the army are sent to Army Medical College for MBBS or for Bachelor of Dental Surgery after which they go through a Basic Military Training at Pakistan Military Academy, Kakul for 22 weeks. Apart from GCs of AM College, IC accepts cadets who will to join EME, Signals, RVFC and Army Education Corps with minimum masters in different fields. The IC has a duration of six months. Cadets pass out as Captains. Their military training includes all the essential components required for commissioning as an officer apart from boxing and acid test.

The PMA Lady Cadet’s Course was first started in November 2006. The course is taken by masters and bachelors qualified ladies who are sound professionals in their fields. The lady cadets undergo a training period of six months and pass out as Captains in supporting arms of the Pakistan Army.